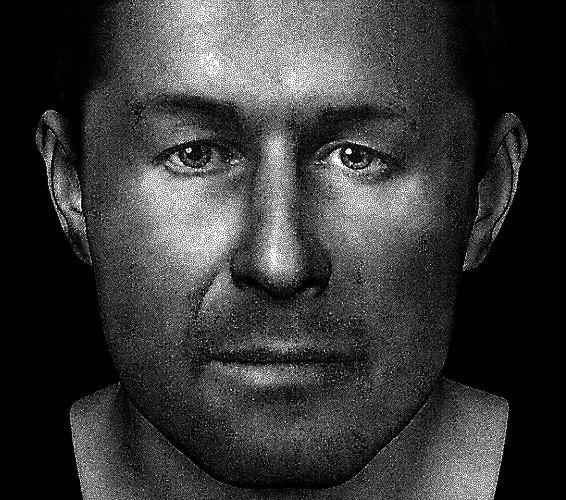 A 3D reconstruction of the man whose body was recovered in 2010.

GARDAÍ ARE LAUNCHING a fresh appeal in an effort to identify a man whose body was found in the sea at the Cliffs of Moher almost 11 years ago.

On 30 July 2010, the Irish Coastguard recovered a man’s body from the sea near the coastline at the Co Clare cliffs.

Gardaí were unable to identify the man due to decomposition and a lack of any personal ID.

He is described as being around five feet ten inches in height, with dark hair.

Gardaí will launch the renewed appeal for information from the public on RTÉ One’s Crimecall at 9.35pm tonight.

Clothes recovered from the man’s body included black socks and black runners with Velcro straps, with the label ‘Indonesia and Budapest’.

A DNA sample was forwarded for testing after a post-mortem exam. A further sample was sent to Interpol and an Interpol black notice was circulated worldwide.

These notices are used to seek information on unidentified bodies.

A palm print was also obtained and recorded for comparison, but no matches have yet been found.

In 2011, a 3D reconstruction of the man’s face was carried out by the Forensic Anthropology Department at the University of Dundee in Scotland.

In 2014, an examination of the remains concluded that the man’s dental work had most likely been completed in mainland Europe.

No news is bad news
Support The Journal

Inspector Helen Costello from Ennistymon Garda Station is appealing for the public’s help to identify the deceased man.

“After nearly 11 years we remain fully committed to establishing the identity of this man in order to return him to his loved ones,” she said.

People can also contact the garda confidential line on 1800 666 111 or any garda station.

Father who was given 11 years for assault loses Supreme Court appeal | BreakingNews.ie

All HSE staff employed during Covid-19 pandemic should be given financial bonus, says Stephen Donnelly